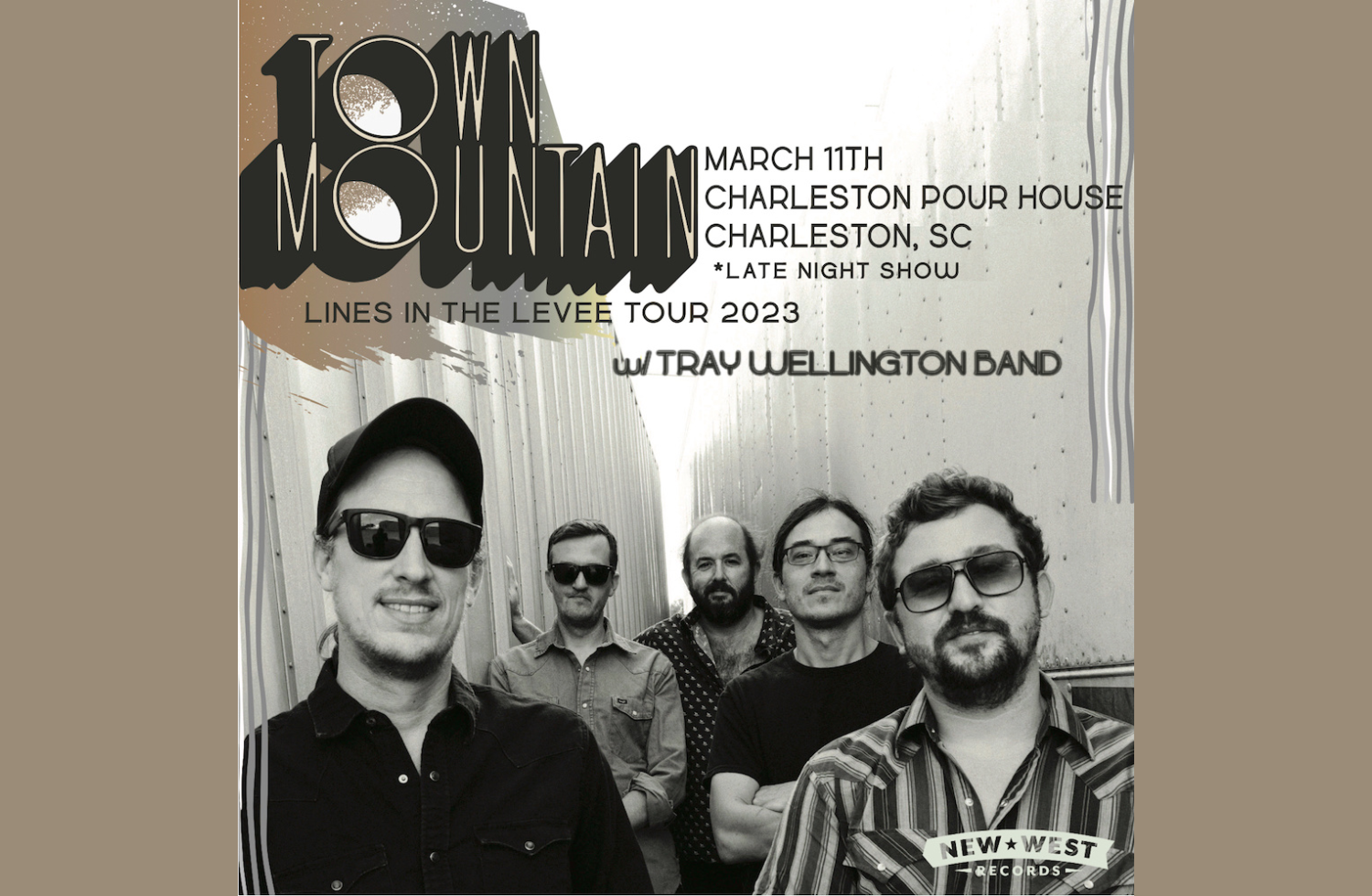 Lines in the Levee Tour

Hailing from Asheville, North Carolina, Town Mountain is the sum of all its vast and intricate influences — this bastion of alt-country rebellion and honky-tonk attitude pushed through the hardscrabble Southern Appalachian lens of its origin.

“For us, it’s all about the interaction between the audience and the band — doing whatever we can onstage to facilitate that two-way street of energy and emotion,” says mandolinist Phil Barker. “Whether it’s a danceable groove or a particular lyric in a song, we’re projecting what we’re going through in our daily lives, and we feel that other people can attest to that, as well — it’s all about making that connection.”

Amid a renewed sense of self is the group’s latest album, Lines in the Levee, a collage of sound and scope running the gamut of the musical spectrum in the same template of freedom and focus found in the round-robin fashion of the musical institution that is The Band — a solidarity also found in the incendiary live shows Town Mountain is now revered for from coast-to-coast, this devil-may-care gang of strings and swagger.

“This is the sound we’ve been working towards since the inception of the band,” says guitarist Robert Greer. “We realized we needed to do what’s best for us. We’re being true to ourselves. It isn’t a departure, it’s an evolution — the gate is wide open right now.”

“We’ve always had such a reverence and respect for those first and second-generation bluegrass bands, and it was that sound that initially inspired all of us to get together,” Barker adds. “And that will always be part of our sound. But, we also need to grow as artists, and as individuals — for us, that means bringing in a wider palette of sonic influences.”

Formed by Greer and banjoist Jesse Langlais over 15 years ago on a ridge high above the Asheville skyline, the sturdy foundation of Town Mountain came into play with the addition of Barker not long into the band’s tenure. From there, the group pulled in fiddle virtuoso Bobby Britt and bassist Zach Smith. And though the road has been long, it’s also been bountiful.

“It’s definitely been a slow climb. But, it’s been a climb nonetheless, where each new opportunity is filled with a sense of gratitude — to be able to make music, to be able to play music with your friends,” Barker says. “And to be able to bring music to the people, and have them want to show up and listen to it? Well, we’re thankful for that every single day.”

Lines in the Levee also marks the band’s debut album release for famed Nashville label, New West Records. Well-known and championed as a fiercely independent act, the members of Town Mountain felt an immediate kinship with the record label — this genuine bond of creative fulfillment and sustained artistic growth to ensure the long game for the ensemble.

“We’ve always wanted to have a relationship with a label that felt right, and New West felt right,” Langlais says. “New West came to some of our shows and the ball started rolling. They knew they wanted to work with us, and we knew we wanted to work with them. New West lets the artist steer the ship and that’s what we were looking for — to have the autonomy to do what we want, but also have a great label behind us.”

Recorded at Ronnie’s Place (part of the Sound Stage Studios) on Music Row in the heart of Nashville, Lines in the Levee is a bona fide workshop in the seamless blend of Americana, country, bluegrass and folk roots — this crossroads of deep influences and cultivated visions each member of Town Mountain brings to the table.

“The studio has been part of Nashville for over 50 years, and there’s a certain mojo that comes from a space like that — you’re literally stepping into history and that history is in the air when you hit the record button,” Langlais says.

The album also cements the standing of drummer Miles Miller (of Sturgill Simpson musical lore) a creative force of nature, one who throws several more logs of ideas and inspiration onto the fire that burns brightly within the group — onstage and in the studio.

“When we were looking to add percussion to our sound, Miles was the guy we wanted. We’ve been good friends for a long time, and it just seemed like the natural fit to have him join us,” Greer says. “He’s a fantastic drummer who really elevates the music so high. And he truly understands how to bring drums into a string band setting, something not a lot of people can do.”

Lines in the Levee is also a moment in time for Town Mountain to take pause and glance over its shoulder at the road to the here and now. It’s this whirlwind blur of people, places and things that fly by, especially when your hardscrabble existence is spent along that lost highway — bouncing from town to town, show to show, all in an effort to turn long-held dreams into a daily reality.

“Right from the beginning, it’s always been about camaraderie and the creation of something unique, where we haven’t let any of the bumps on the music business road get us down too much,” Langlais says. “And I think we feel really comfortable with where the Town Mountain sound is right now — that’s a damn good feeling.”

Tray Wellington Band is a high energy acoustic Newgrass group led by banjo virtuoso, and multi-time IBMA Award winner, and 2019 Momentum Instrumentalist of the year Tray Wellington. This group pushes the bounds of bluegrass music, incorporating Bossa Nova, Jazz, and Blues elements, to their originals to create a unique, new exciting sound, as well as pay tribute to their Bluegrass heroes before them. They have opened for a number of premiere artists in bluegrass including Dan Tyminski, and Joe Mullins.